As I have said before, I am digging more into coding since I started working with LEGO robotics kits with public libraries all around Texas. I am saving lots of resources (with an emphasis on FREE) on learning how to code here. Even though I am also currently taking a course on Scratch, my husband and I are going to be challenging each other by taking an HTML5 MOOC together offered through EdX by The World Wide Web Consortium (W3C), developer of web standards and currently run by some guy named Tim Berners-Lee. It begins today, Monday, June 1st!

All of this online coursework makes me feel like I am back in grad school! I have been keeping up with lots of LIS reading but have been mostly just sharing on Twitter as I haven’t had much time to write. Oh, and I am finally getting around to a little light reading, too. I was rather pleased when I realized that I was using a Library Freedom Project sticker to bookmark my latest read, Little Brother by Cory Doctorow. 🙂

I am loving the Scratch MOOC I am taking! I just completed my drawing project. If any librarians were wanting to teach students or patrons how to code using Scratch, I highly recommend this course. You can model programs on the module homework and projects and watch the kids have a wonderful time. I have been meaning to sit and play with Scratch for awhile now. This course is keeping me motivated to play with different aspects to complete the modules. 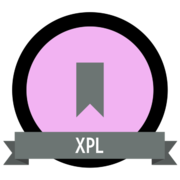 Today I earned my first digital badge by completing the Exploring User Experience in Public Libraries MOOC a couple of weeks ago. This may be nothing more than an indication of participation and completion… but still a little exciting. 😛

I am currently taking a Programming in Scratch MOOC and just completed my first project. I am rather proud of it!
//scratch.mit.edu/projects/embed/63198768/?autostart=false

When I first began work on my Masters through the University of North Texas, I had reservations about how I would do in a mostly online environment. Luckily, I thrived and found the tools provided through Blackboard to more than make up for the lack of “community” or “meeting of the minds”. I did like the fact that the first couple of classes began in person. The other LIS students I met during those couple of weeks I remain in contact with today, several years later. We bonded immediately because we knew our time together was short.

I wrote recently about how the University of Wisconsin and public libraries around their state worked together to provide resources and physical space for discussions for a MOOC on Great Lake climate change. Earlier this year, a university professor made the case for joining MOOC resources and meetups to provide a more meaningful learning experience.

And the Skokie Public Library in Illinois is piloting a program to encourage participation in two Coursera MOOCs by providing a venue for patrons to come together to watch lecture videos and have a “kitchen-table” type conversation about what they learned.

Public libraries and MOOCs have the same goals: to increase access and educate. Librarians want to provide access to quality resources. MOOCs provide that. The biggest barriers for patrons are access to technology. Libraries provide that. And we can provide the physical space and local resources to make the content more meaningful. I really hope to see more public libraries offering this kind of program in the future.

via Scaling Education to the Community: How Libraries Can Leverage MOOCs | MOOC Report.

The Smithsonian and EdX are offering a free MOOC called The Rise of Superheroes and Their Impact on Pop Culture co-taught by Stan Lee and Michael Uslan. It begins on May 5th and run for 5 weeks. Go here to learn more and register!

From Superman® and Spiderman®, to The Avengers® and The Hulk® and beyond, who are these heroes? And, how have they evolved from folklore and myth, across all cultures and religions?

Learn from Smithsonian and industry experts including:

Stan Lee, who created the modern superhero template. His early comics featuring Spiderman, Iron Man®, The Hulk, Thor®, and The Avengers led Marvel to success. He continues to reinvent himself to create modern global superheroes and appear in cameos in superhero films and TV, such as Avengers: Age of Ultron.

In this course, we explore the following questions:

via The Rise of Superheroes and Their Impact On Pop Culture | edX.